When citizens take matters into their own hands

A closer look at citizen collectives established in 2015 and 2016

In order to find responses to current societal challenges, citizens increasingly take control, including in the form of citizen collectives that produce goods or services themselves, usually as a quest towards a more sustainable alternative. With the support of the King Baudouin Foundation and in the context of its Observatory of Associations and Foundations (Observatorium van Verenigingen en Stichtingen), Oikos think tank carried out the first research on these collectives throughout the country: who facilitates them, how important are they and how do they position themselves among other actors in society such as the classic civil society, governments and companies? With a desk study, a survey and in-depth interviews, Oikos mapped citizens’ collectives established in 2015 and 2016.

Increasing number of establishments
In 2015 and 2016, 249 citizen collectives in Belgium were launched spread over the entire country (map available). 127 among them answered the survey and 106 (48 from Flanders, 36 from Wallonia and 22 from Brussels) completed questionnaires were included in the analysis (21 respondents were found not to comply with the definition or were not established during the study period). Of those 106, most are active in areas such as food, agriculture, energy, social inclusion and the sharing economy; more than half classifies their activity under the label ‘environment and sustainability’ (graph available).
This is the first comprehensive investigation for the French-speaking citizen collectives. On the Dutch-speaking side, Oikos, on the other hand, has historical figures from 2004 onwards (graph available), indicating that 2009 was a turning point : the number of establishments has grown strongly ever since and nothing points to a stagnation of this growth.

A few examples: energy or housing cooperatives, food teams, transition groups with a social grocery, cooperative library of things, or community supported agriculture where consumers are closely connected to a farmer and are committed to reducing production, or even participating in the harvest.

Pioneers: highly educated working M/F/X in their thirties and forties
Citizen collectives are largely the work of 25- to 45-year-olds, and the real pioneers are usually 36 to 45 years (graph available). Young people and seniors are hardly represented. There is a balance in the participation of women and men, and single people, cohabitants and married couples are fairly equal (graph available).
Among the pioneers in citizen collectives, highly educated people are strongly overrepresented: 86.3% have at least a Bachelor’s degree (graph available- compared to 45.6% of the population aged between 30 and 34 years according to Statbel’s figures). Most pioneers (84.8%) combine their engagement with a job (of whom four out of ten half-time).
53.7% of the respondents are politically engaged. Half of the respondents (48.6%) estimate that the political preference of the pioneers of their citizens’ collective is left on the political spectrum (graph available).

Relationship with government and industry: a healthy distance
Most citizen collectives (58%) are self-sufficient. 78% came about without public participation. But they think a good relationship with the government is important (80%). Approximately 1 in 3 consults with the municipal authorities about the activities and services they offer. The relationship with the (local) government does not always go smoothly: some are satisfied (“the city made our operations possible”), others less (“we mainly got headwinds”).
According to a minority (16.8%) of the citizen collectives, companies see them as competitors. They themselves see their own role in relation to the business sector as additional (in Wallonia), cooperative (in Brussels), or innovative (in the three regions). (graph available).

Little inclusive
The sectors in which they operate show that citizen collectives often strive for a more sustainable society. They inspire other actors from industry, government and civil society. Partly because of their urge for proximity and small scale in their approach, they still play a modest role as an alternative to production and / or consumption, alongside those (more) dominant actors.

If citizen collectives really strive for a sustainable and inclusive society, then consideration must be given to ways of involving disadvantaged citizens in this citizens’ movement. 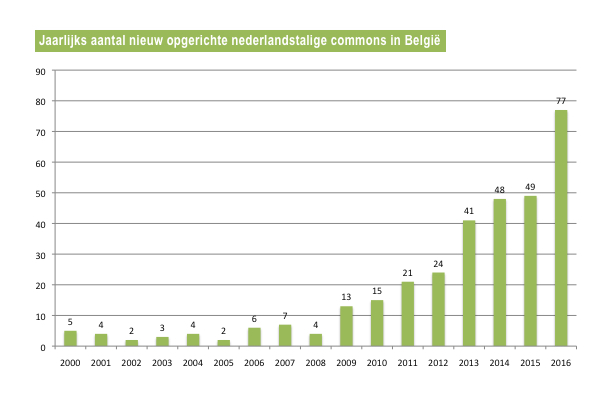